The office of Mark Dziewulski Architect has grown significantly in experience and reputation since it was established nearly twenty years ago. They carry out projects in the USA, Europe and Asia. They have received many design awards, including three Excellence in Design awards from the American Institute of Architects for "Significant Works of Architecture", as well as the International Design and Development Award and the Pacific Coast Builders Design Award two years in a row. Their work includes important cultural and institutional buildings as well as commercial and residential projects. Increasingly recognized as a design leader, their buildings have been published in over a hundred books and magazines in fourteen countries, including The Times in London and several articles in The New York Times. Their projects have also been featured in TV stories and interviews, which can be viewed on this web site on the TV page.

The office was set up with the aim to build architecturally significant projects, creating iconic buildings in the public realm. The designs are intended to be a rigorous expression of dramatic architectural design, whilst also being sensitive to their context and users. The projects combine the use of technological innovation with poetic and sculptural forms to create a strong sense of "place". Mark Dziewulski is personally involved with each project from start to completion, so that the work reflects an individual and distinctive design sensibility. Each new commission receives a fresh approach based on its contextual and programmatic influences. The office is committed to environmentally sensitive construction and has created several technologically innovative buildings.

The office has built several public projects, including a national war memorial in Poland and a United Nations trade headquarters in China. They have also created designs for a variety of cultural and public buildings, including several museums. Their design for the National Gallery, in Trafalgar Square, was published by the Royal Institute of British Architects and was widely praised. The office is currently working on a residential apartment building in London, several houses and commercial projects, and the design phase for a performing arts centre. They recently completed a design for a new museum of aviation in Cracow, Poland.

The work has been praised as being both sensitive to its context as well as providing iconic design, making the buildings important landmarks within their communities. Their goal is to continually evolve and grow as a design firm, expanding the range of their portfolio while striving to create innovative and exciting architecture. 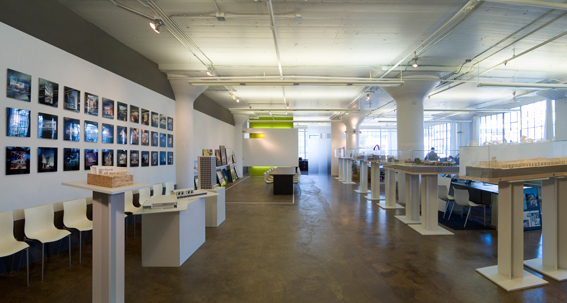 "Mark Dziewulski's recent work places him firmly amongst the most talented of his generation."

"...an exuberant jewel in the landscape, a radical, architectonic form in the manner of Cubist inspired buildings like Le Corbusier's Chapel at Ronchamp."

"...a method of composition inspired by abstract painting and sculpture."

"Mark Dziewulski's Studio is a superb work of art... a spectacular work of architecture, beautifully crafted, sensitively located and a celebration of the interaction of interior and exterior space. The design demonstrates an exploration of both formal and technical issues with great skill."

"...a bold building that adds to its setting without unsettling it - This is a graceful Anglo - American solution."

"The work, while having a sculptural and almost playful quality, is founded on the principals of rigorous investigation in order to create a meaningful and serious architectural expression that resonates not only with its function and context but also with the cultural and emotional significance of the work."

"Mark Dziewulski is an architect making his own distinct impression. He has won over the critics and has helped shape the Sacramento Area."

"...a landmark that fosters a sense of community."

"...like a small town center...where residents meet and build a sense of community."